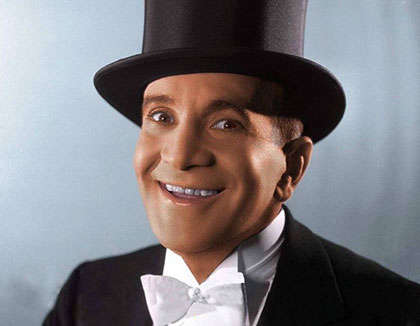 Al Jolson (Asa Yoelson) was born on May 26, 1886, in Srednike, Lithuania. Jolson's family came to the United States in 1894, settling in Washington, D.C. Several factors in Jolson's youth influenced his career, including his religious Jewish upbringing, the death of his mother when he was ten, and his father's work as a cantor (a singer of religious music in a synagogue). Jolson acquired a love of singing from his father, but he did not want to use his voice in the synagogue. Instead, he and his brother Harry sang on street corners to earn money. Jolson also attended the theater whenever possible and discovered he loved to perform.

In 1900 Jolson left Washington, D.C., for New York. His first theater job was in a show called Children of the Ghetto. He also sang in a circus before teaming up with his brother to play vaudeville (traveling stage entertainment consisting of various acts).

Although Jolson did not receive star billing until 1914 in Dancing Around, the audiences clearly came to see him as he became known for songs like "Sonny Boy," composer George Gershwin's (1898–1937) "Swanee," and especially "My Mammy." In "Mammy" he would go down on one knee, and with tears in his eyes he would speak to "mother," telling her he'd "walk a million miles" just to see her. At the end he would get up and sing the last chorus with his hands spread wide and his face tilted upward, and here he is with that world famous song.